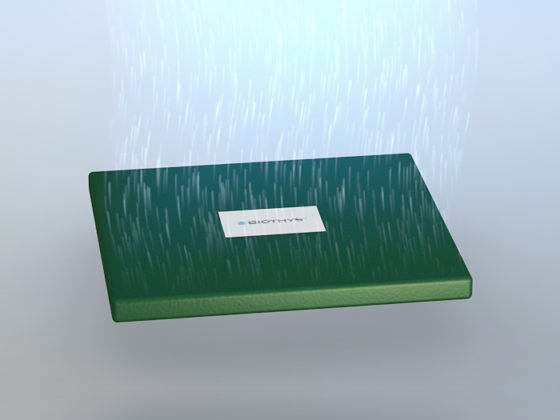 Gel-O-Dor is a polymeric matrix containing active against diffusion-released molecules and scent. Depending on the temperature and the intensity of the air flow, the Gel-O-Dor plate releases the active agents in slow and stable kinetics. The smelly molecules will react with the active agents of Biothys ™ and will be neutralized.

Unlike Gelactiv® plates, Gel-O-Dor® plates not only neutralize odors, but also diffuse a light fragrance into the air.

Gelactiv is a polymer matrix plate that releases active agents. A mixture of agents is incorporated in the gel plate and continuously emits active components into the air stream. The components react with odorants, which are chemically neutralized.

Our technology can reduce olfactory odors by more than 90%.

Gelactiv SHK, specific configuration of Gelactiv, is a polymer matrix plate suitable for the treatment of waste water networks and lifting stations.

BIOTHYS™ is an expert in the treatment of olfactory nuisances in wastewater, industrial and urban sites, canals,…

This website uses cookies to improve your experience while you navigate through the website. Out of these, the cookies that are categorized as necessary are stored on your browser as they are essential for the working of basic functionalities of the website. We also use third-party cookies that help us analyze and understand how you use this website. These cookies will be stored in your browser only with your consent. You also have the option to opt-out of these cookies. But opting out of some of these cookies may affect your browsing experience.
Necessary Toujours activé
Necessary cookies are absolutely essential for the website to function properly. This category only includes cookies that ensures basic functionalities and security features of the website. These cookies do not store any personal information.
Non-necessary
Any cookies that may not be particularly necessary for the website to function and is used specifically to collect user personal data via analytics, ads, other embedded contents are termed as non-necessary cookies. It is mandatory to procure user consent prior to running these cookies on your website.
Enregistrer & appliquer